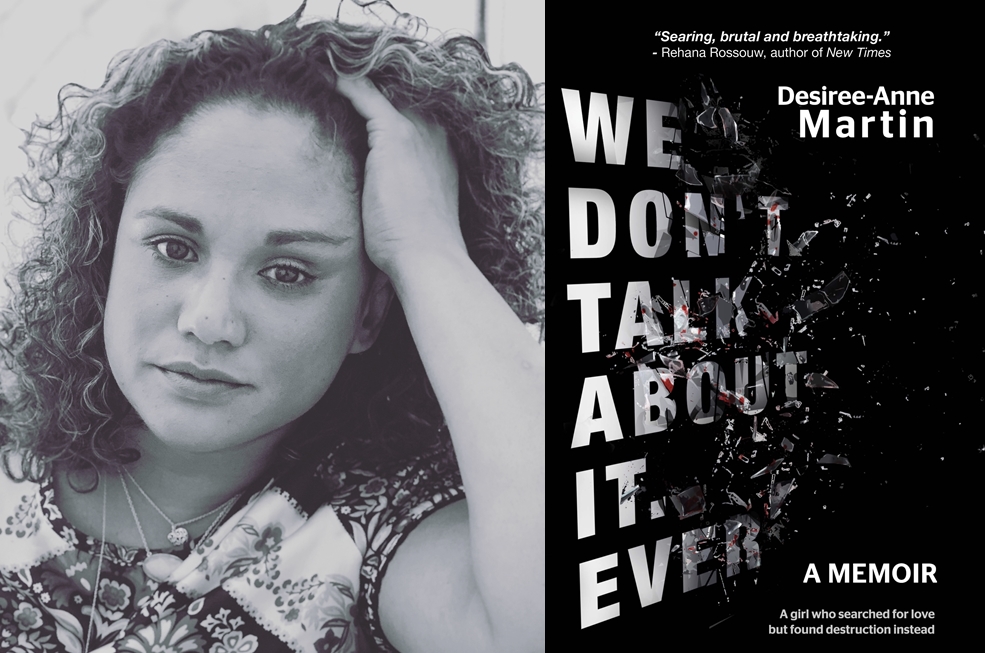 I have just come from a talk by the author of the book, ‘We don’t talk about it ever’. Desiree – Anne Martin. I’ve met her several times in writer’s circles but never heard her speak about her story or read her book.

While I still hold some of my feelings in tact, having let most escape in the minutes of silence that contained the room when she had finished talking, this is what I have to say.

We are surrounded, in this world wherever we are apparently, by an extraordinary amount of pain and trauma. Of unspoken shame, aloneness, fear of vulnerability, shielding secrets, hiding truths. The women and, I think there were one or two men around the table, were mostly middle aged or even older. Grey haired at least. I arrived a little late and sneaked in a few moments into her talk which was delivered slowly and carefully for close on 45 minutes, I think. The room was dead quiet.

She shared her life journey of parental and sexual abuse, drug addiction, self- destruction, repeated attempts of rehabilitation and finally, of redemption and hope. Always hope, she said.

Words are now her drug of choice.

Today, she is an author, public speaker, addictions counsellor, mother of two daughters. Her parents, she said, in response to one of the questions that followed, have never read her book and are unlikely to though she still has a relationship of sorts with them. It was after all, ‘her story, her experience’, not theirs.

I clutched my bag in front of me as the organiser asked if there any questions and eventually after a few moments, one of the women said, ‘I think we all just need a breather for a moment.’

Then, slowly the feelings emerged: about how, tonight, one would cry into her pillow for the little girl who only aged 23 began to ‘open the cupboard’ and start a new journey: about one’s own everyday struggle with a family member who was battling addiction but refused to seek help, and how they felt powerless to intervene anymore; about another who had spent years in rehab and recovered fully to lead a ‘normal’ meaningful life of purpose.
I couldn’t even formulate a few sentences, let alone ask a question. I just gave her a huge hug and wiped my eyes when I finally let go.

Someone must stop the cycles. It needs courage, bravery, dedication, discipline and I don’t know what the hell else because I cannot begin to imagine how hard it must have been.

But there are people like Desiree- Anne to turn to when it all falls apart.

And very often, it all starts with words, and a book.

I would highly recommend that you start with hers.

I salute and admire you Desiree -Anne Martin.