The Artscape Theatre in Cape Town is where Jazzart, a contemporary dance NPO, will be celebrating the graduation of the first class that has been training for the last 3 years. 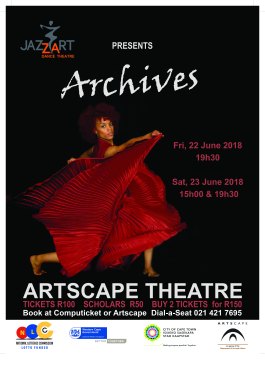 These performers are all young and agile and passionate about the dance.

The works represent the evolution of this Not-For-Profit-Organisation (NPO), paying homage to its legacy while boldly presenting a glimpse of the exciting future before it, and the South African contemporary dance scene as a whole.

The works Jazzart presents are generally acknowledged by local and international audiences, as being of exceptional quality and significance.  The 2018 Winter Season programme is no different and is set to captivate theatergoers and inspire them.  Here’s what can be expected:

Infinite Reflections from Sifiso Kweyama’s springs from the personal experiences of the graduates themselves.  Kweyama as choreographer and resident artistic director, skillfully weaves the individual journeys of his students and their experiences over the three-year training period, into a seamless narrative that will hold the attention of audiences. (Kweyama trained at Jazzart between 1993 – 1999, returning to the company as Artistic Director in 2015.  This is his first graduation class).

Seya (Joy) has been reimagined and reworked by Jacqueline Manyaapelo, who last choreographed the piece in 2013. Inspired by the title track of Malian singer, Oumou Sangare’s, album, the piece performed by the all-female ensemble delves into African rituals and rhythms and is a Joyful, freeing, energetic physical salute to life and living.

Vrugte (Fruits), conceptualised and directed by Alfred Hinkel, and brought to fruition by the three male dancers in the company, is the full-bodied harvest of countless years of nature and nurture, the rewards reaped in the autumn of a life fully lived and could easily be an allegory for Hinkel’s time at Jazzart, which itself is bearing fruit through this graduation and its evolution.

Commenting on the selection of works that will be presented, current Jazzart Artistic Director, Sifiso Kweyama said: “Jazzart as both a training institute and a performing dance company, has spent the last three years concentrating on a new vision.  As South Africa transforms, so must we, and in this year of centenary where we celebrate the late great Nelson Mandela, we felt it pertinent to also reflect and pay homage to our own recent past, while at the same time making a bold statement as to where we are headed.

“Contemporary dance in South Africa is exciting and appealing and I believe these three pieces amply reflect this.  I am privileged to be able to share them with the audience and thank my colleagues and especially Jazzart’s dancers for their hard work, enthusiasm and dedication to perfecting their craft – they all have a bright future ahead of them. Congratulations Class of 2018!”

The importance of the transformative dance programmes provided by Jazzart cannot be under-estimated.  Dance is a strong and growing medium to promote social cohesion, provide an outlet for self-expression and generate a variety of long-term career prospects across a host of disciplines within the overall structure of dance.  Jazzart also offers a series of outreach programmes that embrace rhythm as a fundamental for teaching self-discipline, teamwork and self-development.

Archives will be presented in the Artscape Theatre on Friday 22 June 2018 (19h30) and two performances on Saturday 23 June 2018 (15h00 and 19h30). Tickets cost R100 for adults, R50 for scholars or the season special of R150 for 2 tickets. Tickets are available at Computicket 0861 915 8000 or www.computicket.com Proceeds from ticket sales and support go towards expanding Jazzart’s training programme and into establishing further outreach partnerships.

THE FIRST LUCKY PERSON WHO SHARES THIS POST ON THEIR FACEBOOK or SOCIAL MEDIA page will be the recipient of a set of four tickets.

Lucky winner’s ticket will be left at Computicket box office at Artscape.  Winner will be announced on this FB page. nikimalherbe.