At the beginning of this, the tenth month of 2017 I remember feeling somewhat agitated but couldn’t quite place it. Then I had coffee with a friend and she suggested it was that ‘winding down’ feeling of the year when it’s galloping towards a close and you need to evaluate how it went. And maybe you feel you haven’t quite achieved what you set out to do.

This fact – that we are not alone – should put us at ease but in a challenging, competitive world it’s a primary catalyst for agitation. Not necessarily all bad in intent but a certain cause of conflict and perhaps a little melancholy: the eternal haves versus the have-nots.

In my case it’s the perpetual notion of feeling that I must be doing more, whatever that more might be…perhaps earning more, exercising more, writing more, mothering more or even just laughing more.

But at least when you voice this to your women friends, you know you are not alone for its apparent that the 50’s are often a time for reflection for most women: kids getting older, changing career paths, caring for aging parents.

So here are some obvious things I’ve thought about to help embrace the ‘less is more’:

– An uncluttered, simple lifestyle  and a less emotional attachment to things – this is still hardest for me as I am a serial hoarder of anything but mainly paper and especially notes and pictures from my children but also just STUFF

– When travelling, a backpack rather than a bulky suitcase ( I have yet to wear every item I’ve packed though admittedly have got better)

One of the best ways of curbing your agitation for things you don’t ‘have’ is to cultivate an attitude of gratitude for what you do.

And in the last month alone, I have an extraordinary amount to be grateful for. When a close friend was grieving the loss of her mother (her father having passed away already) I had the absolute privilege of celebrating my father’s 85 birthday with my mother who is turning 79 this week, sister, hubby, children and dear friend.

I also attended my oldest daughter’s school prize giving and valedictory and remembered to bring some tissues. A mother’s pride is something no words can express. (though I wish I had bothered to take a better picture !!)

And then a few hours later ( #grateful for the timing and not having to miss valedictory) I had the fortune and privilege of another short trip to Berlin with my treasured spouse to lay down some roots for the future of our children whose great-grandfather was originally from Germany. One of the highlights was a special visit from a friend who has been in the finals of Masterchef Germany (brilliant isn’t it?!) and her partner whom I have known since I was 14 years old. We met at the new Monkey Bar in Tiergarten and enjoyed a fantastic meal in the hot-house, and again the next night at a stunning little Korean restaurant where they showed us how to drink some strange fermented milk like substance from these metal bowls and cook the meat on a little heated grill plate on the table. 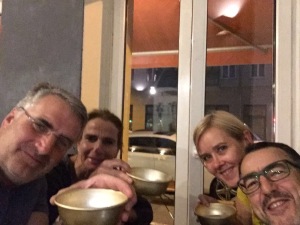 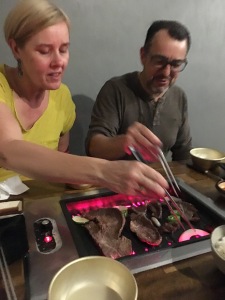 For the first time leaving our two adult children looking after the two younger ones, I am also grateful that we could leave with fewer instructions to no other ‘babysitter’ and returned home safely to a house more or less intact, other than a front end loader bashing down a pillar at the front door when he tried to remove some sand from the driveway which was being widened.

But I feel I want to end off The Bright Side by mentioning my support for #metoo.

And though I don’t want to embellish here, I want to say #metoo: for the subliminal,  reality of things that happened and the interminable imaginings of things that may still happen, not only to me but my precious children.

Perhaps just some of the agitation I feel, subconsciously in my every day doings is the fact that we need to keep moving towards what we need to achieve. And one of these things  – an extraordinarily big, important thing – is for the world to be free of sexual harassment and hurt, of humiliation and exploitation.

But in the gaps in between let’s always look on the Bright Side of Life!

( This blog post was inspired by the music of Dave Koz, one of my favourite tracks called the Bright Side from his CD, The Dance which I’ve been listening to while writing this. It’s about the 100th time I have played this CD )

NEXT BLOG: More on ‘What I learnt in Berlin’!

I dont have the answers, just a lot of questions.