It’s not often that I find myself backpacked and breathing heavily, trampling on stony footpaths. Especially on Monday mornings. They don’t really feel like appropriate times for carefree chitchats when there are things to do, lists to tick… you know what I mean? Beginning of the week kind of stuff?
Well you know what? The last time I hiked up a stony footpath and swam in a dam in my underwear was at Silvermine at the end of February. And you know what happened a week later? All that was prized and cherished was burnt in a devastating fire. So that was a big wake-up call. Appreciate the beauty around you.
With incredible weather and wasted weekend opportunities or perhaps just being otherwise committed I suppose, I have come to the realization that time wasted equals a crime. Nothing vaguely like the crimes of injustice we are witnessing at the moment in this frustrated and struggling country which is so tragic and scary (another topic, not for here) but a personal offence of sorts none the less.
So with no plausible excuse (twisted ankle, injured knee or immediate deadlines – well at least not for today!) off I went- up Llandudno ravine. Yes, didn’t know it was called that either.
Determined to be more mindful of the activity I was pursuing I looked around often, breathed in the scent of fallen pine needles and tried to block out the pleasant, though for me, distracting chatter of mothers on a mountain: recounts of the weekend of children’s sport, how they’re deciding on which high school, what to do about the incessant ipad and how to combine mothering and parenting. That issue of self-worth and reclaiming of confused identity.
I choose to hike to get away from the debate and appreciate the mountain rather but accept that this may of course be construed as anti-social or perhaps even rude so I joined in and listened and commented in between exaggerated inhalations and in no more than 45 mins, we were standing here.

And yes, I couldn’t believe it myself. So high so quickly. And so stunning.
Only a few minutes later I’m suddenly aware of the sheer drop to my left and the vivid image of a newspaper headline that reads: ‘ Mother of four loses foothold on mountain’ and so with that, my wobbly legs gave way to a feeble confession. ‘Um…I, can’t do this.’
‘Just look up, you’ll be fine’.
No, I was seriously stuck. I could not hoist my leg up and grab the nib of rock with my left hand to get up the smooth rock above.
REVELATION NUMBER ONE: I may have a slight case of vertigo. This has never happened before.
REVELATION NUMBER TWO: I haven’t hiked that many mountains recently to have made this discovery.
REVELATION NUMBER THREE: There are some tough women out there. Husbands, you have no idea. 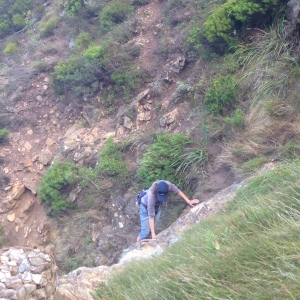 Within minutes one of our small group of five (women) moved closer and shielded me from the gradient that threatened below and I was away.
Now I was seriously on trial.
‘So what’s ahead, Kath?’ I ventured, nonchalantly.
‘Aah, there’s quite a hectic part ahead in the ravine but there’re handle grips. Let’s see how you feel when you get there.’
It was nothing like the last. It was a climb into the ravine with a slightly wider ledge below and the gradient was not so obvious.
REVELATION NUMBER FOUR: If you don’t try, you’ll never know.
And then…
There we were snacking on apples, bananas and almond nuts chatting and gathering as women do, sheltered behind some incredibly shaped rocks, amongst the ericas and fynbos. My attempts at changing the topic of conversation from law and writing to finding out about our environment up there were thwarted.
REVELATION NUMBER FIVE: Nature is seriously beautiful. Nothing more to say.
REVELATION NUMBER SIX: I may become more interested in feminist philosophy .Women make a lot more sense.

I dont have the answers, just a lot of questions.