It’s exactly one month after the book was launched and I now have enough comments on it that make it worthwhile to share some of these – especially for those of you who have yet to read it.

Just the weekend before this though, Lauren Beukes, as one of a panel of fabulous speakers at the Franschhoek Lit Fest (Johan and my favourite weekend of the year!) (together with Imraan Coovadia and Karen Schimke) in her discussion entitled “Who gets to decide?” was talking about the discomfort she sometimes feels when readers come up to her or comment upon the fact that “I really enjoyed your book”.

And then they are quiet.

“Well, which part of the book exactly did you like?” she wants to ask, but naturally doesn’t, and in my minutely limited and notably unmentionable inexperience, I do believe that her response is precisely on target.

I mean, what exactly do people enjoy? Many have said “ I’m loving your book !” or I really enjoyed your book and couldn’t put it down”.

So here. I’ll tell you what I’ve discovered so far.

Readers seem to enjoy different things about a book. Naturally. Some people like the subject matter and the plot: the story, I guess. The unpredictability and intrigue of, what’s she gonna do now?” or the complexity of the characters who resonate with you in some way or another. This enjoyment, it seems, has been the most prevalent- the fact that most readers are mothers themselves and could easily identify with the narrative and could laugh or cry at the situations and think back on how it was for them. It brought back valuable memories.

Many have commented on the enormous value of having a beautiful family reference for my children and my children’s children. Some have commented on the achievement of having kept all the records and berated themselves for not having done the same. To those, I have replied that being around their children and with their children is infinitely more important than having recorded their first steps or first tooth. It was merely my own way of making sense of it all and then, coincidently it formed part of vital material for the end product.

Those who are interested in the ‘writing’ aspect of books have enjoyed the irreverent tone and the honest, humorous and forthright manner in which it was written: the notion of an element of bravery and courage of getting it down in such a pragmatic way.

And then of course there are those who, because it is a true, entirely honest account of a portion of my life want to know what happens inside the life of this person they think they know. They have learnt a little more about me and this sense of extreme voyeurism has been intriguing and satisfying.

The most amusing has been the slightly surprised reaction of those who now have some insight into Johan’s sexual fantasies: something on a boat on the turquoise waves around a tropical island. And this is good too. All normal and all good.

But the best feedback I had was to have received a picture from a friend of her child who she came across sitting in front of the fire on Sunday morning. Though my own children have not read the book (and I intend that they only read it when they are older) he clearly was intrigued about its contents.

A credit to his parents to have a wonderfully interested, questioning child. 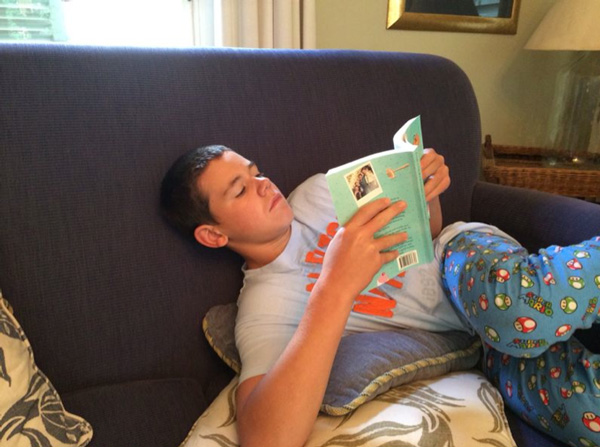